“I live for this. Every year, the season in January, February and March; this is my life. I’m in my third year with Ignite, my second year doing the Winter Sports Clinic, I’m getting better, my MS is getting better, and I give all the credit to every one of these guys and girls in the yellow [Ignite] jackets!” says Ted Deloach, an Ignite Student with the Veterans Program on a bluebird afternoon in the Ignite Trailers, otherwise known as World Headquarters.

Ted has been making his way into the hearts of all the Ignite Volunteers for the last three years. “I’ve sat in every one of these bucket-skis, and if there were 144 Ignite Volunteers, I’d say I’ve skied with 145 of them,” Ted shares.

He grew up on the East Coast where he learned how to surf and ski. He joined the United States Marine Corp and was first stationed near the old Lowry Air Force Base in Denver. During that time Ted experienced his first taste of Colorado Champaign Powder. He was hooked. After leaving the Marines he moved to Denver and made skiing his life. He was an avid skier until 1996 when he was diagnosed with Multiple Sclerosis (MS). And, due to weakness in his legs, he gave up skiing. For two decades, something was missing in his life.

“After sitting for 20 years in a chair with MS, I knew all the prices on The Price is Right,” Ted says. Thanks to two influential Recreational Therapists at the Veterans Affairs, Ted was recommended to try the Ignite program in 2017. He never looked back. “My favorite part is the skiing, of course,” Ted shares, “but it’s these guys, the encouragement, camaraderie, instruction, and professionalism I get from the Ignite Volunteers, it lends credence to what they’re doing and it makes me feel more confident about what I’m doing.”

Ted moves forward in the Ignite program with the goal of becoming independent on the Mono-ski. “I have MS, so I have scoliosis in my back, and keeping my balance is the key,” Ted says. “You don’t pick up where you left off at the end of each season, so this year I’m having some difficulty. I really wish I could ski all year long.”

He believes skiing has helped his MS symptoms, and now is able to try other things he gave up when diagnosed in 1996. “I’m about ready to pick up the guitar again. I used to play classical string guitar. When I got MS, I lost some fine motor skills in my hand, so as my MS is improving, I’m able to pick that back up again.”

Ted graciously compliments everyone at Ignite for their hard work in helping people with disabilities enjoy the best of what Colorado has to offer. “For the person here in this chair, it is giving them freedom and liberation. I’m so proud to be here. I’m proud of everyone here. And I feel that if a volunteer goes as deep and wide with their volunteering as they can, and they make the most of it, the value they get out of it is amplified by the students and athletes they’re working with.”

We couldn’t agree more. Thanks to the wonderful Vets, such as Ted, our volunteers get excited for VA Days at Ignite. Many volunteers arrange their entire schedule to be on the snow with these amazing men and women, as it tends to be such an inspiring experience. During the 2019/2020 Season, Ignite served over 285 athletes with disabilities. 64 of which were U.S Veterans. Although this year things will be a bit different due to COVID-19, we have high hopes of smashing that number in future years, and we cannot wait to get started.

Dear Friends of Ignite: Thank you for all you do... 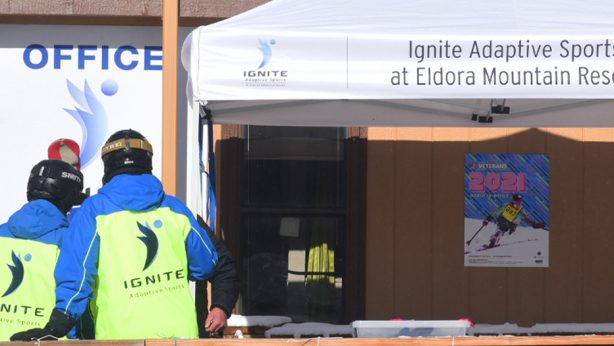